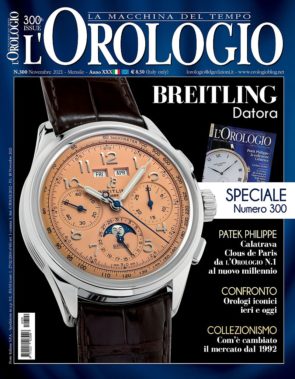 On newsstands today, issue number 300 of L'Orologio celebrates almost 30 years of a great adventure that began in September 1992, thanks to the initiative of publisher Renato Giussani.

The monthly magazine L'Orologio, distributed at newsstands throughout Italy and online on the Pocketmags platform, is a point of reference in the watch industry. Today, the magazine, under the leadership of editor-in-chief Dody Giussani, is committed to disseminating information in a varied and dynamic way.

Among the contents of issue 300 is the return of the Calatrava Clous de Paris, version 2021, which was on the cover of issue 1 of L'Orologio in 1992. It is accompanied by a selection of iconic watches, in a comparison between the 1990s versions and those of today. Then, thanks to contributions from the protagonists of the auction world, we analyse how the vintage market has changed from 1992 to today.

Launching L'Orologio 300 will be a special event, on 19 November, in collaboration with Bretiling, the protagonist on the cover with the Datora Premier Heritage. The meeting will be hosted by the Cornali jewellers in Bergamo, by invitation only.

L'Orologio's online activity is growing and changing: a burgeoning Instagram page, which from 18 November will feature revamped graphics and a new editorial plan; a new website, orologioblog.net, also being launched with a graphic and content restyling; the video appointment with L'Orologio News, inaugurated in 2021, in which the most relevant news of the month are commented by the editor (the videos are published on the magazine's website and on social networks, from Youtube to Facebook and Instagram); the weekly newsletter, with reports and comments on the latest and most relevant news.

In addition to the monthly magazine and annual issues of the Yearbook and L'Orologio Almanacco, there are also numerous activities that promote meetings between watch manufacturers and enthusiasts, thanks to the creation of L'Orologio Club, the first Italian community of high-end watch enthusiasts and collectors. To them, the major Swiss and German brands open the doors of their manufactures, inviting them to visit the production sites of their best-loved watches, accompanied by L'Orologio staff.

Other key partnerships are those with major institutional and trade fair organisations: the prestigious one with the Fondazione dell'Alta Orologeria, for the organisation of conferences and seminars; with Vicenzaoro, which in the September 2021 edition hosted the Orologio dell'Anno (Watch of the Year) award, the only Italian award for watchmaking, instituted by L'Orologio in 1994; with the Geneva Grand Prix d'Horlogerie, to which the magazine is united by a double bond, as Supporting Media Partner and through the editor, Dody Giussani, already a protagonist of the jury in past editions and a member of the GPHG Academy.

A special issue tracing the evolution of watchmaking over the time covered by the first 300 issues of L'Orologio.